Savour food – Culinary Tourism in the Okanagan & the @OKFWWWorkshop

Culinary Tourism and my trip to the 2013 Okanagan Food and Wine Writers Workshop (@OKFWWWorkshop) in Kelowna, British Columbia were the topics of my most recent food column on CBC Radio One’s Alberta at Noon . You can catch that podcast here. My column starts at the 17:53 mark in the show.

Albertans (and people from around the globe) love to visit British Columbia’s Okanagan Valley each summer. Kelowna alone receives 1.5 million visitors. I’ve been visiting regularly since I first went with my husband in 1987. We spend at least two weeks every year there now with our family. I never tire of going so I was naturally drawn to the @OKFWWWorkshop. My writing can always be improved and the whole area acts as a muse for me. It consistently inspires me to write.

This post will add more depth to my radio column’s outline of recent developments in culinary tourism in the Okanagan. I’ll also share some photos of the food, wine and general good spirits brought about by exploring the farm to table agri-tourism offerings in Kelowna. I hope you enjoy reading about it as much as I enjoyed being there. Better yet, go and savour a little of the Okanagan good life for yourself.

The 2013 OKFWWWorkshop (see more info about the workshop here) started with a reception at The Old Laurel Packing house in downtown Kelowna which is home to a Vintner’s Quality Alliance (VQA) wine shop and The B.C. Wine Museum. We got to sample wines by Cedar Creek and The View Winery along with über local canapés by Waterfront Wines award-winning chef Mark Filatow. Tourism Kelowna’s Nancy Cameron and Peter Donkers, the executive director of the Investment Agriculture Foundation of B.C., announced a $100,000 injection of cash into Kelowna’s Farm to Table culinary tourism initiative. There will be increased marketing support for restaurants who work extensively with local food producers and agri-tourism farm gate operations. Hopefully, that will manifest in the outcome of an increasingly vibrant agri-tourism economy. You can find out about the Farm to Table featured restaurants and farm tours at Tourism Kelowna.

Tourism Kelowna has developed five Wine Trails and one Farm and Studio Trail within the city limits which are Do-It-Yourself driving tours. Last year we did a farm tour in the rolling hills of East Kelowna. We visited Arlo’s Honey farm, The Okanagan Lavender and Herb Farm, Sunshine organic seed farm and then dined in the tasting room of Tantalus Vineyard. Tantalus is perched atop a hill looking west over the lake with softly sloping vines trailing off its shoulders. After a day of cycling the farm lands we felt like heroes gazing into the sunset as we savoured sultry sips of Tantalus wine paired with the house-cured charcuterie and seasonally bright cuisine de terroir of Penticton’s Joy Road Catering.

This year we experienced some of the culinary expertise that is the reason the Okanagan is home to the Canadian Culinary Championships each year. I’ll give you an overview of a few chefs and what they cooked for us.

The Delta Grand Okanagan acted as base camp for the writer’s workshop. Chef Stuart Klassen is president of the Okanagan Chef’s Association, was born in the valley and has the energy of ten mighty michelin-starred chefs. He’s a lot of fun and brings passion and drive to all he does. Of course, he prepared offerings for us using as many local ingredients as possible. Klassen’s high standards extend to the staff he hires and that is evident in the wine knowledge of the hotel’s assistant manager Paul Clark. Clark is a sommelier and respected wine educator with 30 years experience in the Okanagan. He paired a Quail’s Gate “Optima” Sauterne–like dessert wine with crème brulee. Both were great on their own. Together they created an intense burnt orange flavour: the alchemy of a wine pairing master. From breakfast buffets, to lunch served in preserving jars post canning class with the B.C. Tree Fruits group to an eight course resort roving feast we were treated to the depth and breadth of Klassen’s imagination. It’s a deep well of creative deliciousness. Here are some photos of some of my favourite dishes we were treated to. 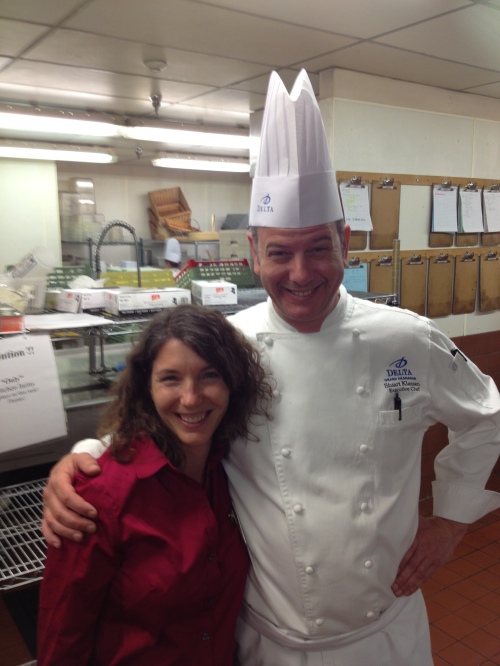 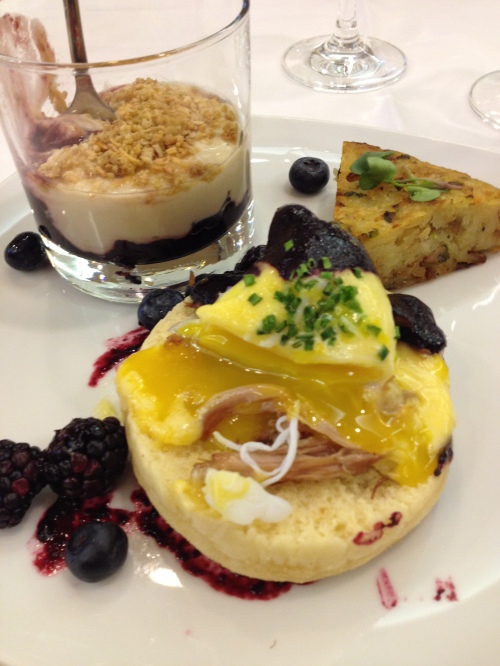 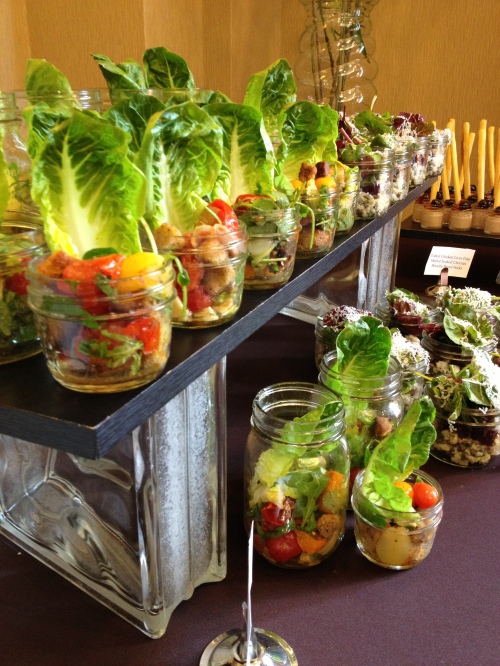 Chef Brad Horen of SmackDab restaurant at Manteo resort hosted a luncheon which directly reflected the resorts emphasis on high quality fresh and fun food for the whole family to enjoy. Smackdab features tasting flights of microbrewery beers and light fresh Neopolitan style pizzas. B.C., Alberta and the Pacific North Western region of the U.S. with favourites like Mt. Begbie’s Kolsch are included in the suds list. The pizza was made with double zero flour and San Marzano tomatoes and cooked in an 550 to 600 degree oven but that was where similarities to Neopolitan ended. I was happy about that because I don’t always love the soggy in the middle bit about the classic. I enjoyed these more cracker like and crispy pizzas.

Chef Jesse Croy at Summerhill Pyramid Winery’s Sunset Organic Bistro presented a Spring Foragers and Farmers menu. Head to Hoof Cheese, Haida Gwaii Halibut cheeks with Wild Boar Pancetta, Confit Chicken Thigh, Basil fed Snails, Elk Medallions and Parmesan Ice Cream with Rhubarb Napoleon all paired with the biodynamic wines of the Cipes family and wine maker Eric von Krosigk. One of the most refreshing things the chef did was serve a palate cleanser where he froze a peeled orange then placed it in a Vitamix blender with a cup each Stinging Nettles and mint with a little ginger syrup and wow – it was a fresh spring breeze in a cup!

Does this dish of Basil fed Snails look eponymous to you? 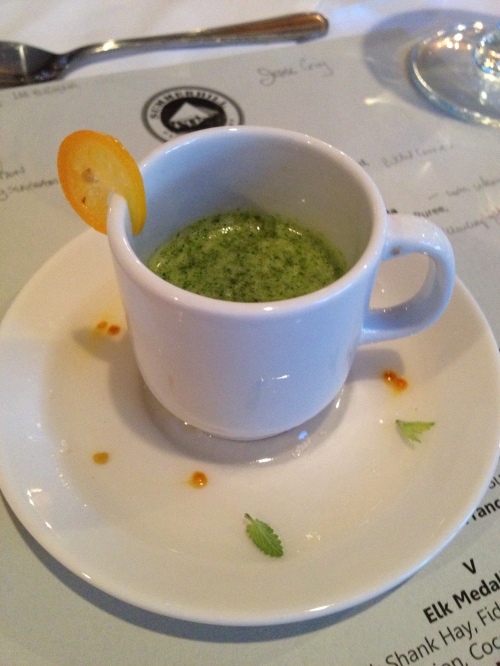 Along with all these fancy dinners we did partake in a few more humble and skill building culinary endeavours. We learned to preserve apples with Darcella Markgraf, the home economist with @bctreefruits. 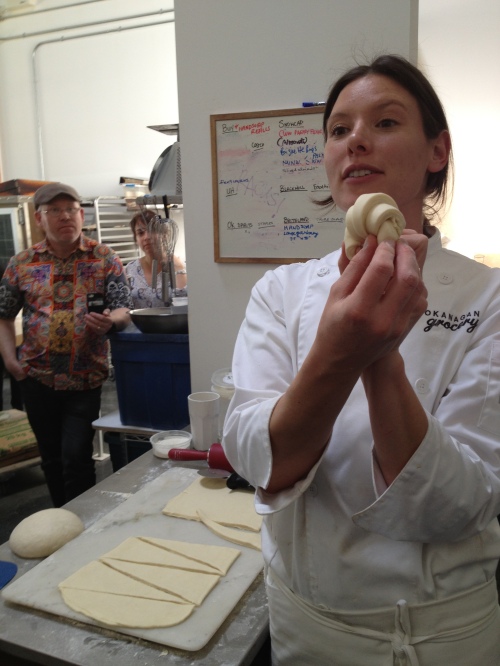 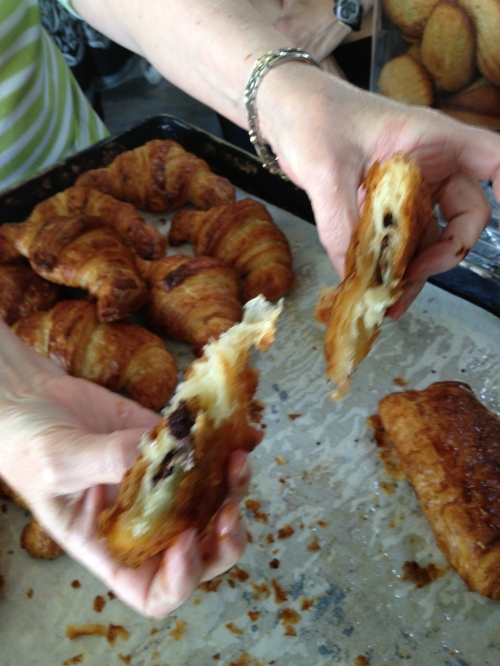 Touring the Okanagan Spirits distillery was a revelation for me. I know little about spirits and was awed by the gleaming copper still and rows of stylishly bottled spirits. I tried several of their liqueurs and eau de vie distillations all made from local fruits. They were wonderful but I love that they also daringly make Absinthe and my Swedish Anderson family’s holiday staple Aquavit. I didn’t even get to around to trying the gin, vodka and whisky. Obviously I’m still in need of training to be outstanding in the field of booze writing.

We finished the workshop with a sustainable dinner cruise on Okanagan Lake aboard the Lake Lounge Executive Houseboat, where we enjoyed a Discovery Islands oyster bar by Codfather’s Seafood Market and dinner by Cabana Grille chef Jeremy Luypen featuring Okanagan Nations Alliance sockeye paired with wines from Sperling Vineyards – one of the oldest grape farms in the valley with vines dating back to 1929.

That’s a brief summary of the menu of delectable delights discovered while exploring culinary tourism in Kelowna at the OKFWWWorkshop. We did learn lots about writing too in case you are wondering and though I learned a lot at each of the presentations I was especially impressed with the honesty and generousity shared by self-published cookbook author Jennifer Schell.

If you have no way to make it to Kelowna or the Okanagan this summer, I would recommend you get yourself a copy of her book The Butcher, The Baker The Wine and Cheese Maker – An Okanagan Cookook. You will be taken on a tour of the Okanagan Valley and introduced to her collection of friends and given their recipes and stories as you go. You’ll meet clusters of three with a winemaker, chef and farmer or food artisan at each stop all the way from the northern communities of Enderby and Armstrong to the most southerly town of Osooyos. The photography, profiles and recipes will reveal to you in much greater depth what I have only been able to give you a glimpse at. Schell is a Kelowna native, she grew up on an apple farm and her love for the Okanagan Valley and its food and people shines through.

That’s a lovely way to end a blog on food writing. Schell’s cookbook is a great example of how this genre of writing helps people savour life in the Okanagan. If the workshop were a cake recipe then our host Jennifer Cockrall-King and speakers Curtis Gillespie (Editor of Eighteen Bridges), Amy Rosen (Food Editor of Chatelaine Magazine), Shelley Boettcher (Author of Uncorked in Alberta), Nancy Wise (Sandhill Book Marketing) and Jennifer Schell all shared tips, mistakes and successful strategies for a fool proof recipe. All that food and wine we enjoyed, well, that was the icing on our cake that is writing. Together all these great ingredients will keep us coming back to help whip up another batch of finger=licking fun with our fellow writers. Jennifer Cockrall-King, the founder of OKFWWWorkshop; she’s one smart food writer and metaphorical cake baker and decorator.