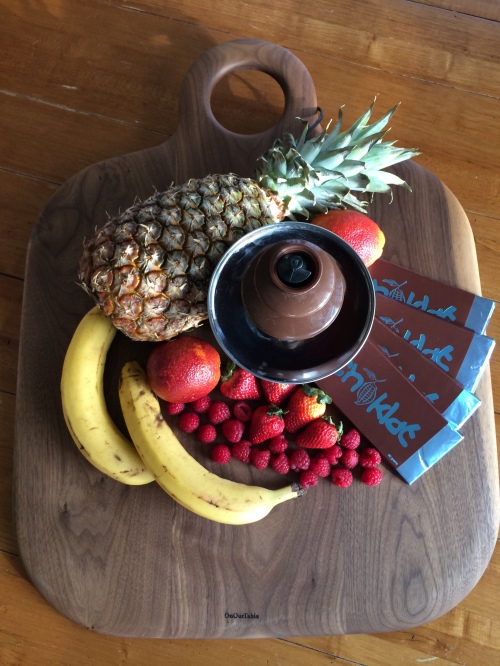 Chocolate is a great ingredient and some say it is its own food group. In the history of chocolate, we’ve gone from small family run firms concerned with ethical practices and the purity of their product – to big multinational corporations infamous for their exploitive monopolies and ruthless quest to increase bottom lines – to a new trend back called the “bean to bar” movement which appears to once again be focusing on purity and ethics.

This post will talk about what it means to be a bean to bar chocolate maker and the history of how we’ve arrived at this trend. To close we’ll focus on Alberta’s one and only bean to bar operation, a company called Choklat and its three Alberta stores. 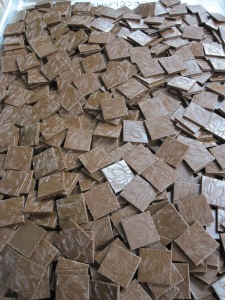 If you take a Chocolate Snobbery class at Choklat you get to try samples!
photo – Karen Anderson

Bean to Bar chocolate makers make chocolate from scratch. They source their chocolate from small estates and regional coops where they know exactly how the chocolate is grown, fermented and dried. They will then sort, roast, winnow, conch and temper their chocolate at their own facility and because they have such control over the quality of their beans and how they are processed you will usually end up with an incredible result.

If you are thinking what’s the big deal? Don’t all chocolate companies make their own chocolate? The answer is no.

A distinction is now being made between bean to bar chocolate makers and the chocolatiers and candy makers of the world because chocolatiers buy chocolate already made (maybe with a custom recipe) from the world’s largest chocolate makers – Nestle, Hershey’s or Barry-Callebaut. In fact, Barry-Callebaut whose Canadian plant is in Chatam Ontario has over 6000 recipes they supply to chocolatiers around the world. Chocolatiers get their chocolate in supplies known as couvertures (large chunks) and are experts at tempering that chocolate and moulding it in creative ways to form candy, confections or Forrest Gump’s famous box of chocolates – you know the one where you never no what you’re going to get.

It wasn’t always this way. The following is a very brief history of chocolate, much of which I gleaned from reading the book below.

• Chocolate has been enjoyed for 5000 years on the planet. Montezuma and the Aztecs gave drinking chocolate to the Spanish conquistadors. They took it back to their queen and it became chic in the courts of Europe.

• In the early 1800’s small family run companies like Cadbury and Rowntree in England, the Dutch company Fry’s and the Nestle family in Switzerland began industrializing the cocoa bean into edible commodities and the first bars of chocolate were born.

• Hershey and Mars families in the United States started up in the 1930’s.
• According to Deborah Cadbury, the author of Chocolate Wars, when the Cadbury’s, Rowntrees and Hersheys were at the helm of the chocolate industry they used their profits to invest in community betterment as that was one of the pillar beliefs of their Quaker religion. Where many of their competitors were using additives to make their chocolate less expensive to produce, the Cadbury’s especially, took a vow to use only the finest and purist ingredients and ethics in their business. They believed they could use their business to help England heal from some of the cruelties of industrialization and their money could be used to improve the human condition. 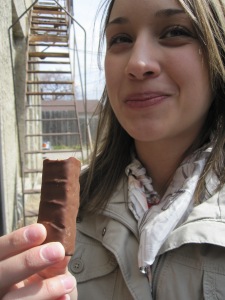 • By the new millennium chocolate had turned to a game of mergers and acquisitions and with the global giants like Barry-Callebaut, Nestle and Kraft at the helm of the industry, there was a shift to a capitalistic ethic centred on stock prices, profit margins and creation of efficiencies in the industry. The trade policies and working conditions of these companies in West Africa, especially Ghana, were eventually exposed as extremely exploitive. Use of child labour and not paying workers enough money to survive on were commonplace.

Some of us like to savour our chocolate, some of us can’t wait to dig in
photo – Karen Anderson

• Consumers were appalled when Ghana’s travesties came to light and some began to look for businesses with more humane practices and standards. When they could not find what they were looking for, they created a new direction themselves and the bean to bar movement was born. 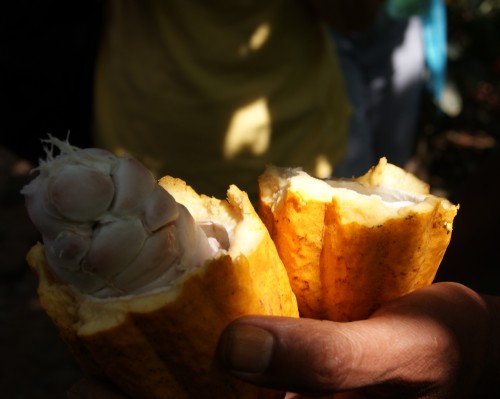 Cocoa beans will only grow within 20 degrees of the equator. The distribution of cocoa plantations around the world is 74.8% in West Africa – with more in the Cote D’Ivoire than Ghana now – and the rest spread through equatorial nations with a new emphasis on plantations (about 12.2% of the world’s total) in Papua New Guinea and Indonesia. Brazil, Ecuador and other countries in Central and South America make up the remaining 13% of production globally.

While production in West Africa, Papua New Guinea and Indonesia is mostly destined for Barry-Callebaut (which produces 90% of the world’s chocolate) smaller cocoa bean farms around this equatorial belt are starting to sell their beans direct to people who want to make chocolate because this direct trade allows them to make a living. Small single origin and single estate growers are desirable partners because they are also able to manage the much greater quality control sought by bean to bar operators.

Direct trade is different from fair trade which is a policy that demands that workers are paid a market standard. Many of the big companies have now made allowances to meet this standard and though that is a slight improvement it is still barely enough for workers to survive on as the average wage is about 54 cents an hour. Direct trade, where a price that will allow cocoa bean farmers to live and operate sustainably is negotiated each year by the bean to bar buyer is becoming the standard in this emerging branch of the chocolate industry.

According to The Ultimate Chocolate Blog, there are now 13 bean to bar chocolate makers in Canada. In Alberta we have one company with three locations.

Brad Churchill is the owner of Choklat. a businessman who admits that he had an obsession with chocolate that left him dissatisfied with companies that were just buying chocolate to make confections under their particular brands. He wanted to know what it would be like to buy the beans and actually make chocolate from scratch.

In 2005 Churchill fulfilled that dream and imported his first small shipment of cocoa beans. He spent three years working like a mad scientist, to develop his own chocolate recipe and machinery, putting in thousands of hours before finally opening his first store in Calgary’s Inglewood district in 2008. He has a second Calgary store in Banker’s Hall and he opened his first franchise store just off Whyte Avenue in Edmonton in 2013.

I’ve taken a lot of people to chocolate tastings at Inglewood store over the last six years and the reaction is remarkable. People have a number of epiphanies. The first is a realization that cocoa is actually a fruit. It grows in big yellow football shaped pods and the beans are actually seeds hidden in the centre of the fruit much like a melon. When people eat chocolate made in this small batch way from single estates or growing regions they begin to taste that fruity essence of the bean.

They also begin to taste the terroir of different regions. Churchill acquires his beans from the Porcelana region in Tabasco Mexico. The regions of Ocumare, Cuyagua and Chauo in Venezuala and from small plantations in Brazil.

Because Churchill is making chocolate that preserves the beans’ distinctive flavours you’ll taste different flavour profiles with each kind of chocolate. Churchill, who always disliked Forrest Gump’s box of chocolates where you don’t know what you’re gonna get; allows people to choose the exactly combination of flavours in the truffles his stores make fresh on demand for each customer. With this practice and the taste of his chocolate, Churchill feels he has achieved what he set out to do.

But for me it’s not only the taste of his chocolate that’s fantastic –it’s the mouth feel – it is always 100% silky and smooth. I also appreciate that Churchill only puts cocoa beans, cocoa butter, sugar and vanilla in his recipe and that allows the natural flavours in the cocoa beans to really shine through.

Over time, Choklat’s production capabilities may allow for further franchising and there may be more stores across Canada but for now if you want to try this chocolate you need to get yourself to one of the stores in Edmonton or Calgary. The product is not shipped. When I go I buy the pure chocolate bars. The shops also sell bark, baked goods, glitter pops and cool little chocolate fountains for two and that is an incredibly romantic way to enjoy this chocolate…very important stuff with Valentine’s on our doorstep.

Other than a fondue or chocolate fountain, I would never cook with this chocolate. It’s expensive and I think you would lose all the flavour that makes it so distinctive if you combined it with other ingredients.

If you’d like some treats you can make up with more pedestrian chocolate check out my next post. There you’ll find a fun updated recipe for brownies with a raspberry cream cheese swirl and a very elegant white chocolate maple bourbon lava cake recipe that I finish off with white chocolate ganache and bourbon soaked cherries.

Chocolate has a range of products. Just yesterday I entered a grocery store to find a huge assortment ready for Valentine’s shoppers. I think I eat less chocolate now but I eat way better chocolate. I’ve been spoiled for life by the quality I’ve experienced at Choklat. When I buy a bar it often lasts me a few weeks. I take a little bit at a time and savour it all. That’s the way I like my chocolate and that’s the way I like my life.

Filed under Alberta at Noon