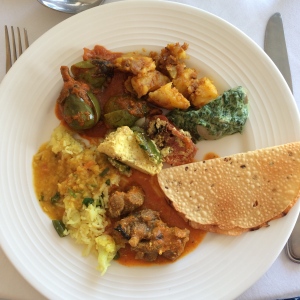 This week on Alberta at Noon I’m going to talk about my most recent culinary expedition to India. In November I took 21 guests to explore the food and culture of the capital region of Delhi and two of India’s Northern States: Uttar Pradesh and Rajasthan.

I especially loved Rajasthan which is renowned as the land of colours.

The colours dazzle against the backdrop of landscape’s sandy hues. The tropically hued fuchsia and tangerine saris of the women flow like nectar giving our eyes, like hummingbirds to the flower, a little relief from the neutral tones which though soothing do not tend to be as life-giving. The colours of Rajasthan light up like match tips in the equally bright turbans of the men which change from village to village, occupation to occupation, and perhaps signal that molds that castes were made of are hard to shatter. You see a rainbow of colour in the food markets that materialize on street corners just as the evening meal must be shopped for and of course those were my favourite colours of all: the aubergine and bright green of indigenous eggplants, the scarlet of tomatoes and the muted tones of neatly bundles onions, herbs and India’s own culinary gems; her spices.

The people of Rajasthan truly manifest their culture’s belief that “Guests are Gods”. My business partners at Indus Travels and Hi Tours of India live and breathe this philosophy in every action they take for me and my guests on my annual odyssey to their homeland. They have become my second family and even though we are half a world away for 50 weeks each year I hold them dear and look forward to our yearly fortnight reunion.

This post will share a few of the many recipes that the expert cooks I met in Rajasthan so generously shared with me. I thought they might be just the thing to help us savour it all on cold Canadian January days when we might not otherwise feel quite up to the task. 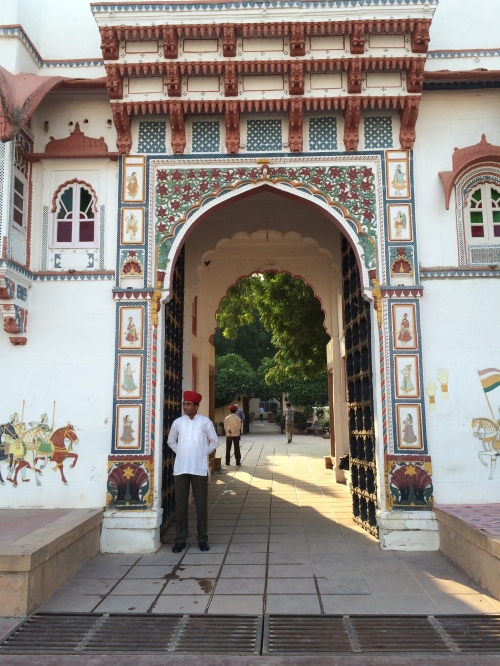 To break the long journey from the lush lake town of Udaipur in the south of Rajasthan to our destination in the remote desert village of Khimsar, we stopped for a cooking lesson and lunch at Rohet Garh. A Garh is a fort.
This fort, located on the outskirts of Jodhpur, was given as reward for bravery after a battle in 1622 and has been owned by the same family ever since. In 1990 they opened their doors as a 34 room retreat from the world with an emphasis on equestrian activities. The late matriarch, Jayendra Kumari, was especially famous for her cuisine and at the request of so many of her guests she wrote a small cookbook. Today, the chefs of Rohet Garh and family happily teach cookery lessons at visitors requests. We felt very fortunate to cook with Kadir Khan who cooked at Mrs. Kumari’s side for over 25 years.

I hope you enjoy the recipes. This food is a warm reflection of my time in that vibrant place.
Note: I have decreased the amount of chili powder originally called for. Adjust it to your tastes and enjoy. As they say in Rajasthan, “Rum Rum Sa” – Blessings to you.

Rajasthani Lal Moss
Adapted from Rohet Garh’s Cookbook by Jayendra Kumari
2.5 lbs Alberta beef stew meat, cut in 1 – 2 inch pieces
1 c. Greek yogurt (you can substitute other yogurt if you strain some of liquid to increase the thickness)
1 t. Indian chili powder or cayenne pepper (do not use Tex Mex chili powder – we are going for heat here not smoke)
2 t. ground coriander
1 t. turmeric
1 t. salt
6 T. sunflower oil (this is what the Indian chefs at Rohet Garh used – you can substitute organic canola if you can’t find sunflower oil)
2 red onions, chopped
2 cloves of garlic, pureed as described below
2 inch knob of ginger – pureed with the garlic and 2 t. of water in a mini-chopper to make a paste (or chopped as finely as possible if doing by hand)
¼ c fresh cilantro leaves, chopped
Rinse the meat under cold water; pat it dry with a paper towel and set aside.
Mix the yogurt, chili powder, coriander, turmeric and salt and set aside.
Heat the oil in a heavy bottomed pressure cooker (or heavy-bottomed stockpot if you are going to transfer it to a slow cooker).
Add the onions and fry until golden.
Add the garlic and ginger paste, cook until fragrant – about 45 seconds
Stir in the yogurt mixture and simmer until the oil separates.
Add the meat, stir till coated (note: either transfer all ingredients to a slow cooker for 6 – 8 hours at this point or) continue cooking on the stove top till the oil again separates.
Add 3 cups of water and bring to a boil.
Place the pressure cooker lid on and cook for 15 minutes at 15 psi (my Lagostina will only go to 13 psi so I cooked it for 20 minutes to compensate).
Turn off the heat and let the pressure reduce (This might take 15 minutes, so set the table or clean up the kitchen while you wait).
Serve garnished with the cilantro leaves over some basmati rice or with a good Indian bread like chapati, roti or Naan. The eggplant dish that follows is also great.

If you see these little “Indian eggplants” while shopping – do buy them. They’re delicious.
photo – Karen Anderson

Sabat Baigan (Whole Indian Eggplants in a Tomato Sauce)
Adapted from Rohet Garh’s Cookbook by Jayendra Kumari
1 lb small round “Indian eggplants” (see Karen’s blog for what these look like)
3 T. sunflower oil
2 red onions, chopped
6 tomatoes, chopped
2 cloves of garlic, pureed as described below
2 inch knob of ginger, pureed with the garlic and 2 t. of water in a mini-chopper or chopped as finely as possible if doing by hand
¾ t. Indian chili powder or cayenne
1 t. turmeric
2 t. ground coriander
1 t. salt
Wash the eggplants and with a paring knife make about a 1 inch deep X in their bottoms; set them aside.
Heat the oil in a heavy pot and add the onions frying till light brown.
Add the garlic and ginger paste and fry until the oil separates.
Add the tomatoes, chili powder, coriander, turmeric and salt and cook until a thick gravy is formed and the oil separates.
Add the eggplants, cover with a lid and cook until tender (adding extra water if necessary).

Me and Mrs. Rashmi Singh, owner of Rohet Garh (the Singh family’s home since 1622) 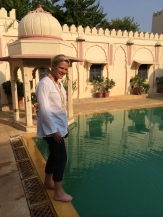