Art Installation No. 28 – My Favourite Public Art in Calgary 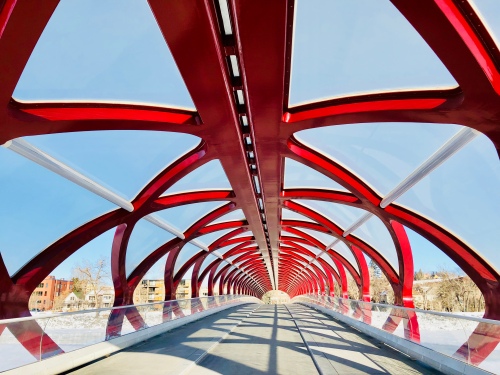 When you go to a great city, what do you remember? For me after the people I meet and the food I eat, it’s the architecture, museums, parks AND – more and more – the public art. This post is about my favourite public art in Calgary. I haven’t captured it all yet, but this is a good start and if you find yourself in Calgary with a few spare hours, check out the link in this article to a map produced by the city. 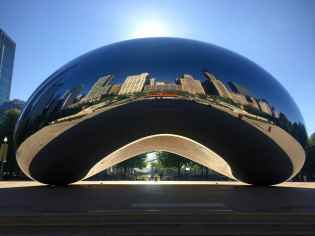 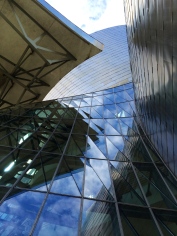 I can’t think of Chicago without smiling at my memories of squishing together with my college roommates for a photo by Anoosh Kapoor’s “the bean” in Millennium Park (upper left photo above). In Bilbao, Spain, (remaining photos above) my family enjoyed everything about the interior of Frank Gehry’s Guggenheim and then we spent another few hours walking the bridges, parks and streets surrounding it to enjoy the extra public art installations there. Paris is littered with public art from the funky modern fountains at the Pompidou to the classic sculptures of the Tuileres or Luxembourg gardens.

According to the City of Calgary’s public art website, “Public Art enhances the experiential nature of our city, plays a role in attracting creative businesses and workers, and encourages the growth of a culturally informed public.” Calgary has a policy that states that, “capital projects over $1 million allocate 1 per cent of the first $50 million of eligible project costs and 0.5 per cent of the portion over $50 million to public art, up to a maximum of $4 million per project.”

Some people fuss over that amount of money being spent on art here but I think that is shortsighted. I hope, our visitors begin to associate public art memories with their visit to our city and that the pieces we offer the world will help glue a little bit of our soul to theirs.

I’ve counted 79 permanent pieces of public art listed on the City of Calgary Public Art Map  (which includes locations and descriptions). Some of these pieces date back 50 years. Calgary was only incorporated in 1884. How many great European cities had this much public art when they were 135 years old? Just to keep things in perspective.

I know there are many more works than those listed. I love our current mural movement but, for sculptures and structures, the following is a list of  my personal favourites.

Created by British/Spanish sculpture Mario Armengol in 1967 for the British Pavilion at Expo ’67 in Montreal, this piece stands 21 feet tall. It was donated to the City of Calgary and placed on this spot in 1968. I like this piece because the humans are stripped down and clinging together to survive in solidarity. That’s the serious side of me. Another side just remembers playing “ring around the roses” with the very patient grown-ups in my life as a child. I feel joy when I think of that. 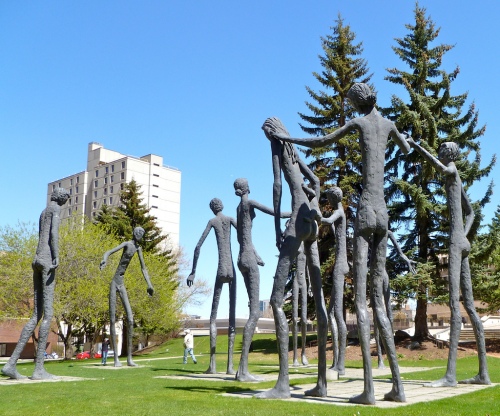 Donated by Norcen Energy Resources donated this piece by William McElcheran was part of his The Businessmen Series in which he took statues off pedestals and brought them into the real world. I once had a patient named J. Robertson that looked at exactly like these chaps. I swear he was the model and, since I liked him, I like these a lot. And, just as I enjoyed long talks with my friend, I think I would have liked to be in on this conversation too. 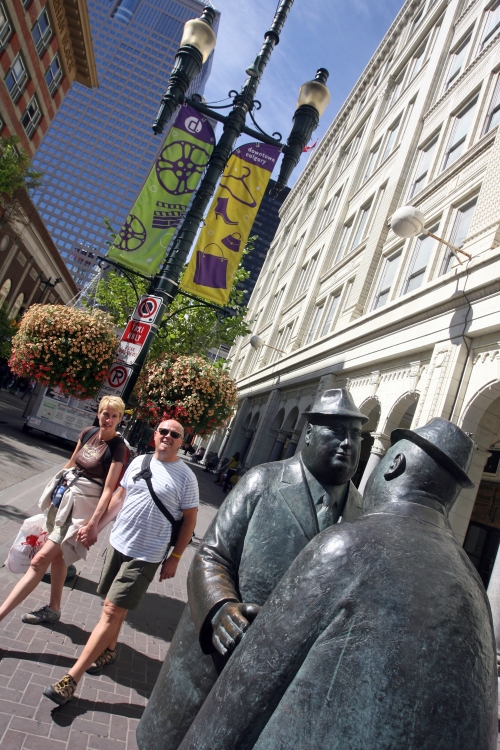 The Conversation by William McElcheran – photo courtesy of Tourism Calgary

By John Seward Johnson Jr., this is another great selfie favourite in Calgary. It’s just so inviting, how can you resist placing yourself in this scene? 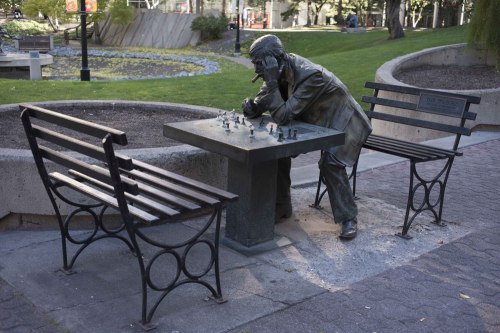 This piece by Harry O’Hanlon was donated by Spruce Meadows (that is the very quietly generous Southern family who own Spruce Meadows) and has had permanent pasture on the steps of City Hall ever since. Is it just me or is it odd that there are three horses and no manure? Maybe there’s enough of that inside City Hall. (Insert groan here.) 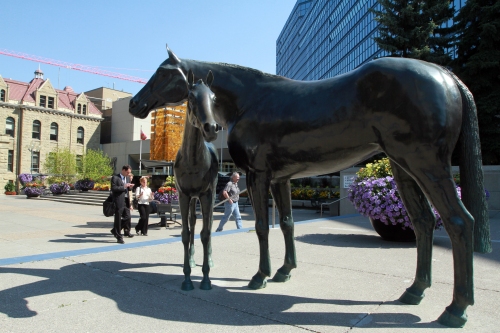 Alberta sculptor Barbara Paterson’s famous piece can be found at the Teatro Restaurant end of the plaza. Emily Murphy, Irene Parlby, Nellie McClung, Louise McKinney and Henrietta Muir Edwards were the five Alberta women who succeeded in having the British North American Act changed to recognize women as persons. The Famous Five Foundation carries on the spirit of their work today, as women have still not achieved gender equality in most fields they enter. 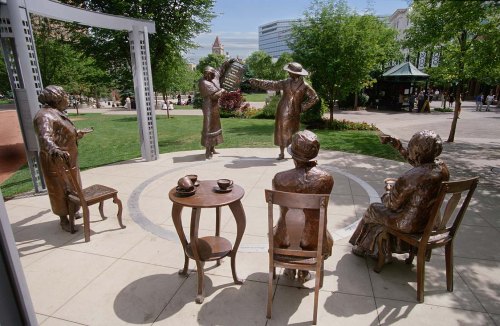 In Search of Gold Mountain – Riverfront Avenue and 1 Street S.W.

By Chu Honsun, this piece is 15 tonnes of granite paying homage to our Chinese immigrants in Sien Lok Park (the only green space in Chinatown). It traces the first Chinese as workers on the railway, transition to laundry owner and market gardeners to full integration in Canadian society. 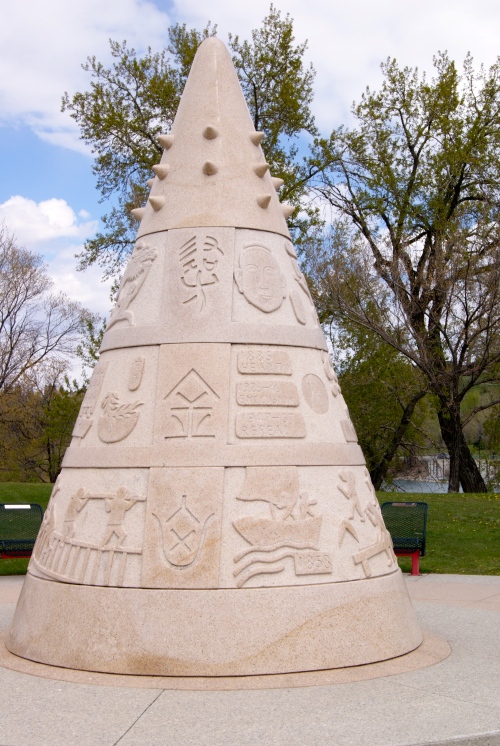 Located across the street from popular restaurant, Deane House, these 10 sculptures were created by 13 members of the Stone Sculptor’s Guild of America during a conference in Calgary in the summer of 2007. The theme was “The Circle of Life” and 35,000 pounds of limestone were used. Instead of costing the city $300,000, local companies donated everything the artists needed and they in turn donated their works. The artists include: Eldon Guay, Brian Pawlak, Stephen P. Turner, Joel Bourne, Rena Krusky, Knicki Markolf, Ken Parry, Jo-Ann Shaw, Tom Allan, James Jennings, Connie Carruthers, Barry Johnson and Tobias Luttmer.

This six meter tall orb of stainless steel has 16 computers controlling 400 lights inside. The lights create shimmering effects on the spheres’ 144 connecting plates. The Hitchhiker’s Guide to the Galaxy and the relationships between our past and future inspired this piece by Calgary artist Jeff de Boer. I once had the opportunity to hear de Boer speak at TEDxYYC and was fascinated by his journey to success. He took jewellery design and welding at the Alberta College of Art and Design so that he could create very small sculptures of warrior mice that resemble the Xian warriors. His wife believed in him and put him through school. Some of his mice are now in The Smithsonian and he had a team of people work on this sculpture with him.

Many people think Santiago Calatrava’s Peace Bridge resembles a “finger trap.” I think of it as “the twizzler” and my cardiologist husband calls it, “the stent.” No matter what you call it, it’s fun to walk across at any hour and in any weather. Calatrava is a structural engineer, born in 1951 in Valencia, Spain. He is renowned for his bridges; train stations and museums the world over. This bridge makes getting there half the fun. 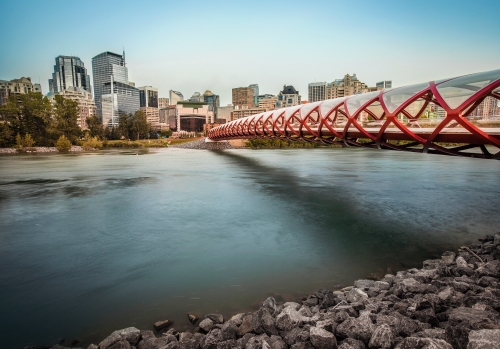 Designer Jaume Plensa allows you to get inside this young girl’s (her name is Anna) head or think outside of its box. Stop for the photo opp at this most Instagrammed spot in Calgary. At 12 metres high, the sculpture is imminently accessible with two large doorways that allow you inside. It’s interactive art and incredibly complicated in its deceptive simplicity. Jaume Plensa was born in Barcelona in 1955 and was awarded the honour of creating this piece in a competition with 27 other artists from around the world. Another of my favourites of his works is in Chicago’s Millennium Park. It is called Crown Fountain and its constantly changing LED imagery is also a huge crowd pleaser. 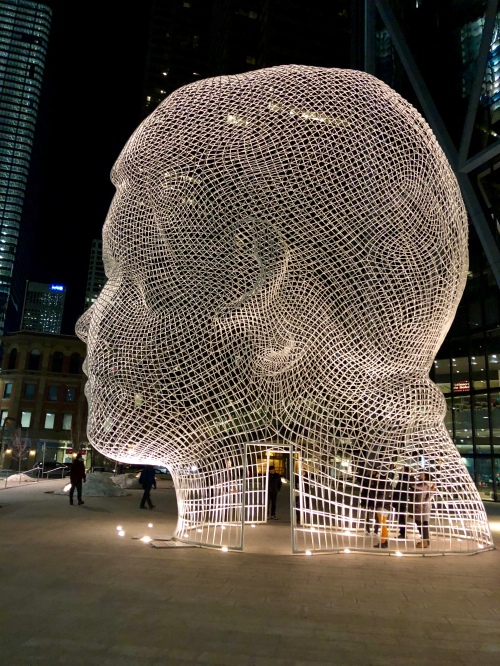 4 responses to “Art Installation No. 28 – My Favourite Public Art in Calgary”